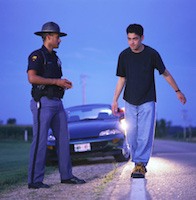 After you see the flashing blue and red lights in your rear view mirror, your first instinct may be to panic. If the police officer notices any visible signs of intoxication in addition to erratic driving, he or she may choose to give you a field sobriety test (FST). These tests are often represented in movies and television as a character is forced to count the alphabet backwards, balance on one foot, or walk in a straight line. While some elements that Hollywood portrays are fictional, highway patrol and law enforcement officers in Arizona may ask you to take a field sobriety tests

An experienced DUI attorney in Mesa can use the results of the test, circumstances surrounding the test, medical history, and other issues to your advantage. This will help severely weaken the field sobriety test results, which are often a main component of the prosecution's case against you. James E. Novak, a former prosecutor, knows this all too well. As a defense attorney, he currently represents men, women, and youth in cases throughout Maricopa County, including Phoenix, Mesa, Tempe, Scottsdale, Gilbert, Chandler, and nearby areas.

If you are facing DUI charges in Maricopa County and have taken a field sobriety test, contact The Law Office of James E. Novak. His experience on both defense and prosecution may prove just as useful as his technical background, which can help in analyzing the science behind DUI testing. Call (480) 413-1499 or send an online message to learn more about how James E. Novak can defend you future from the DUI charges you're facing.

What should I do if I'm asked to take field sobriety tests?

There is a battery of field sobriety tests (FSTs) given that includes, heel-to-toe, finger-to-nose, one-leg stand, eye test called "horizontal gaze nystagmus" test, alphabet recitation, modified position of attention (Rhomberg), fingers-to-thumb, hand pat and others. In Arizona, most officers will use a set of six common tests. Arizona DUI law does not require you to take any of the Field Sobriety Tests (FSTs). However, you may be immediately arrested for DUI in Arizona if you refuse and your refusal to take the FSTs may be used against you by the Arizona prosecution if you decide to challenge your Arizona DUI at trial. The tests are additional evidence which the police use to build its case against you for the Arizona DUI.

What about following the penlight with my eyes to the left and right?

That test is called the "horizontal gaze nystagmus" test, a relatively recent development in DUI investigation. The officer attempts to estimate the angle at which the eye begins to jerk. Nystagmus is medical description for a distinctive eye oscillation. If this occurs sooner than 45 degrees, it theoretically indicates a blood-alcohol concentration over .05%. The smoothness of the eyes tracking the penlight or other stimulus such as a finger or pencil could also be a factor in the test results.