Leaving the Scene of the Accident / Hit and Run 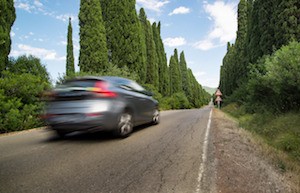 Being involved in a vehicular accident in Arizona can be a stressful, nerve-racking, and emotional event. Whether or not your actions caused the accident, the adrenaline rushing through your system can be tough to control, as can your instinctive fight-or-flight response. Whatever the circumstances of the accident, it is important for Arizona drivers to remain at the scene until their statutory duties are fulfilled.

Maricopa County Leaving the Scene of the Accident Defense Attorney

With over 15 years of experience and several specialized degrees guiding his understanding of the law and the courtroom, James Novak founded his practice on the philosophy that a client’s needs and defense strategy come first. As a former prosecutor for the Maricopa County District Attorney’s office, he knows what it takes for the state to win a case – and how to build a strong defense against such a strategy.

If you have been arrested and charged with a leaving the scene of the accident offense or other failure to stop charge in Mesa, Tempe, Gilbert, Phoenix, Chandler, Scottsdale, or East Valley, contact the Law Offices of James E. Novak today. Experienced Tempe criminal defense attorney James Novak will work to ensure you receive the strongest defense possible to the state’s case against you. Your first consultation concerning your Maricopa County leaving the scene charges with the Law Offices of James E. Novak is free, so call (480) 413-1499 today to schedule yours.

After an accident, all Arizona drivers have a very important obligation to stop and share specific information as well as render aid. This is required by statute under ARS § 28-663 for any accident involving damage to another vehicle driven or attended by another person, or injury or death to another person.

The specific information required is the driver's name, address, and registration number for the vehicle he or she is driving. If requested, his or her Arizona driver's license must also be shown to the other persons involved in the accident. Insurance information is also usually exchanged, but is not required by statute. If injury is involved in the accident, an Arizona driver must render reasonable medical assistance to the injured person if he or she requests it, or if it is otherwise apparent that treatment is necessary.

Reasonable medical assistance includes making arrangements for the injured person to be carried to a facility for medical treatment. Failure to follow all of these rules as they apply to your accident is a misdemeanor offense under this statute, and it is advised you seek the counsel of an experienced vehicular crime defense lawyer in Mesa for an arrest for this offense.

Leaving the Scene of an Accident Offenses in Arizona Defined

There are two main offenses for hit and run in Arizona. One is leaving the scene of an accident that resulted only in damage to a driven or otherwise attended vehicle, governed by ARS § 28-662. If you are involved in an accident in Arizona that only has vehicular damage, you must immediately stop at the accident scene or return as quickly as possible, and then fulfill your duty to provide information and render aid. The stop must be made while obstructing as little traffic as necessary. Failure to comply with any or all of these requirements when involved in an accident with vehicular damage to the other party is an offense.

The other offense is leaving the scene of an accident with injury or death to a person, defined by ARS § 28-661. Any driver involved in an accident that results in injury or death to another person must stop at the accident scene or return quickly and stop without causing traffic obstruction and render sufficient aid as well as provide his or her name, address, vehicle registration number, and upon request, driver’s license information. Failure to do so is a serious offense with severe penalties. It is best to contact an experienced Maricopa County vehicular crime attorney as soon as possible after your leaving the scene arrest if you are considering legal counsel for your defense.

Penalties for Leaving the Scene of an Accident in Maricopa County

Failure to stop and leaving the scene of an accident involving physical injuries or death are felonies. In addition to the statutory penalties for the specific offense, felonies in Arizona come with sanctions like ineligibility for certain professional opportunities or government assistance, and loss of certain civil rights.

Leaving the scene of an accident involving injury other than death or serious injury is a class 5 felony, punishable by nine months to two years in jail and a $750 fine. A three-year driver’s license revocation will also be imposed. Any accident involving serious injury or death where the person leaves the scene is a class 3 felony, upgraded to a class 2 felony if the driver who failed to stop is found to have caused the accident. A serious injury is defined in ARS § 13-305 as a physical injury that causes reasonable risk of death, serious and permanent disfigurement, loss or protracted impairment of an organ or limb function, or serious impairment of health.

A class 3 felony is punishable by two and a half to seven years of jail and a $750 fine, while a class 2 felon faces four to ten years in prison and a $750 fine. A failure to stop at an accident resulting in serious injury comes with a five-year license revocation, while leaving the scene of an accident resulting in death comes with a 10-year license revocation. When facing charges for any failure to stop or leaving the scene case, it is strongly advised you seek the counsel of an experienced Mesa traffic lawyer as soon as possible after your arrest.

If you have been charged with leaving the scene of an accident in Maricopa County, including Mesa, Tempe, Gilbert, Phoenix, Chandler, Scottsdale, and East Valley, contact the Law Offices of James E. Novak. Experienced Tempe traffic crime defense lawyer James Novak will use his personal experience as a prosecutor to locate weaknesses in the state’s case and expose them before the judge. Your first consultation with the Law Offices of James E. Novak is free, so call (480) 413-1499 today to schedule yours.